"Funny and scary ... an utterly believable critique of society. A+"
--THE WASHINGTON POST

"This year's best movie is a comic book."
--"ALL THINGS CONSIDERED," NPR

Y: THE LAST MAN, winner of three Eisner Awards and one of the most critically acclaimed, best-selling comic books series of the last decade, is that rare example of a page-turner that is at once humorous, socially relevant and endlessly surprising. Written by Brian K. Vaughan (Lost, PRIDE OF BAGHDAD, EX MACHINA) and with art by Pia Guerra, this is the saga of Yorick Brown--the only human survivor of a planet-wide plague that instantly kills every mammal possessing a Y chromosome. Accompanied by a mysterious government agent, a brilliant young geneticist and his pet monkey, Ampersand, Yorick travels the world in search of his lost love and the answer to why he's the last man on earth. Collects issues #1-5.
See More See Less 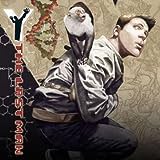 Y: The Last Man
Written by Brian K. Vaughan (Lost, EX MACHINA), this is the saga of Yorick Brown--the only human survivor of a planet-wide plague that instantly kills every mammal with a Y chromosome. Accompanied by his pet monkey, Yorick searches for his lost love...and the answer to why he's the last man on earth.

100 Bullets
If a stranger offered you a chance to get away with murder...would you take it? In this dark, multiple award-winning crime series, ordinary citizens are given the opportunity to exact revenge on a person that has wronged them. Guaranteed full immunity, what would you do?
Preacher
At first glance, the Reverend Jesse Custer doesn't look like anyone special--just another small-town minister losing his faith. But when he comes face-to-face with proof that God exists, he begins a violent and riotous journey across the country in search of answers from the elusive deity.
Ex Machina
When an accident gives Mitchell Hundred amazing powers, he becomes America's first living super-hero. Eventually tiring of risking his life merely to help maintain the status quo, he retires from crime-fighting and runs for Mayor of NYC, winning by a landslide. And that's where his adventure begins...
Sweet Tooth
Out of the deep woods, from the mind of acclaimed cartoonist Jeff Lemire, comes a series like no other! After being raised in total isolation, Gus--a boy born with deer-like antlers--is left to survive in an American landscape devastated a decade earlier by an inexplicable pandemic.