The Mighty Thor Vol. 1: Thunder In Her Veins

When Dr. Jane Foster lifts the mystic hammer Mjolnir, she is transformed into the Goddess of Thunder, the Mighty Thor! Her enemies are many as Asgard descends further into chaos, and unrest threatens to spread throughout the Ten Realms. Yet she wages her greatest battle against a far more personal foe: the cancer killing her mortal form. When Loki steps back into Thor's life, will it ease her troubles or only add to her pain? There's no such question about Malekith as he continues to fan the flames of a looming War of Realms — when he isn't wedding planning, that is! And as Asgard is torn apart, the skies will shake in one of the bloodiest battles of all time: It's Thor vs. Odin like never before!
See More See Less 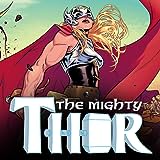 The Mighty Thor (2015-2018)
When Dr. Jane Foster lifts the mystic hammer Mjolnir, she is transformed into the Goddess of Thunder, The Mighty Thor! Her enemies are many, as Asgard descends further into chaos and war threatens to spread throughout the Ten Realms. Yet her greatest battle will be against a far more personal foe: the cancer that is killing her mortal form.

Thor (2014-2015)
Who is the new and mysterious woman wielding the Hammer of Mjolnir? Let she who is worthy possess the power of the Mighty Thunderer! Introducing a Thor that the Marvel Universe has ner' encountered before. But is this new Thor Asgardian, or from Midgard?
The Unworthy Thor (2016-2017)
The Odinson's desperate search to regain his worthiness has taken him out into the cosmos, where he's learned of the existence of a mysterious other Mjolnir. This weapon of unimaginable power, a relic from a dead universe, is the key to Odinson's redemption — but some of the greatest villains of the Marvel Universe are now anxious to get their hands on it as well. Can The Odinson reclaim his hon
Thor (2018-2019)
Collects Thor (2018) #1-6. Thor Odinson regains his mantle — and with it, a wild new world of trouble! He may not have Mjolnir, but he has hundreds of new hammers! And he’s going to need every last one of them to stop the unstoppable Juggernaut! Then, the sons of Odin ride again as Thor is reunited with his long-lost brother, Balder, to face the fire goblin armies of the Queen of Cinders! W

Original Sin: Thor & Loki
THOR: THE TENTH REALM. Thanks to the events of ORIGINAL SIN, the deepest secret of the Nine Realms is revealed... a Tenth Realm! Plus, the sister Thor never knew he had is revealed... Angela!