Struck by a bolt of lightning and doused in chemicals, Central City Police scientist Barry Allen was transformed into the fastest man alive. Tapping into the energy field called The Speed Force, he applies a tenacious sense of justice to protect an serve the world as The Flash!

The Flash's Rogue's Gallery are back--but they are more powerful than ever and they're each looking to take down the Fastest Man Alive! Who is behind their sudden organization and why are they also after their former leader, Captain Cold? The Flash must think fast if he can outrun and survive their attack! 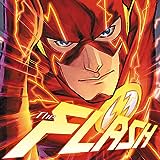 Green Lantern Corps (2011-2015)
Writer Peter Tomasi returns to the ring-slinging Corps! When deadly conflicts emerge across the universe, it's up to Guy Gardner, John Stewart and an elite Green Lantern strike force to keep the peace--or else.