After his returned speed sent him blazing out of control across the country the previous issue, the Flash is missing and feared dead! Tina and Mason head out in search of the missing hero. 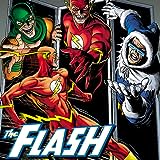 The Flash (1987-2009)
During the CRISIS ON INFINITE EARTHS, Barry Allen--a.k.a. The Flash--made the ultimate sacrifice and gave his life to save millions. In his stead, the world welcomes the new Fastest Man Alive, as Wally West picks up his mentor's mantle. Long live the Flash!

JSA (1999-2006)
The world's first superheroes reunite once more to form the Justice Society of America! Join the original Green Lantern Alan Scott, the first fastest man alive the Flash Jay Garrick, the man who taught Batman to box, Wildcat, and a slew of younger heroes as they built the world of tomorrow, today!
Teen Titans (2003-2011)
Superstar writer Geoff Johns reunites the sidekicks of the greatest heroes of the DC Universe once more to re-launch the DCU's premiere team of super-teens, the Teen Titans! Featuring Kid Flash, Superboy, Raven, Beast Boy, Wonder Girl and more!

The Flash (1959-1985)
The Flash of the Silver Age races onto the scene! After being doused in chemicals and struck by a bolt of lightning, police scientist Barry Allen became the Flash, the Fastest Man Alive! As the defender of Central City, the Flash battles against his colorful Rogues Gallery, including Captain Cold, Mirror Master and more!

Wonder Woman (1987-2006)
Master comics storyteller George Perez (NEW TEEN TITANS) revitalized Wonder Woman in the mid-'80s with this stunning new origin for the Amazonian Princess! What terrible event led to the birth of the Amazons, and how will Wonder Woman fare as their agent against the vile Ares? Find out here!