Superman’s downfall, impossible as it seems, has come at the hands of Vandal Savage. After eons of seeking a method to draw back to Earth the meteor that granted him immortality, Savage has discovered he can realize that goal by tapping into the Man of Steel’s super-abilities, and in turn the combined might of the Justice League.

With the Last Son of Krypton powerless to stop him, the immortal is primed to recall the comet that granted him eternal power. And as it nears Earth, it also awakens Savage’s genetic signature within members of the world’s unsuspecting populace. Literally growing mad with power, Savage’s progeny will stop at nothing to ensure their patriarch succeeds.

Superman’s salvation—and Earth’s—may lie in the one substance that’s lethal to the Man of Steel. Should he use it and somehow defeat Savage, one thing will be certain: regardless of the outcome, Superman as the world knows him will be no more. 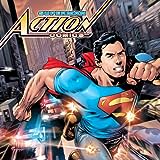