Linda Danvers is finally hitting her stride as Supergirl. Linda was hurtled into the world of crime-fighting when she was rescued from near death by fusing with Matrix, a protoplasmic version of Supergirl. She is getting better at balancing her old identity, including her relationships with friends and family, with her role as Leesburg’s guardian angel.

Just as Supergirl begins to gain confidence, the arrival of an intriguing new superhero named Comet rocks her world. Who is Comet? Where did he come from, and how did he end up in their quiet small town? Why is a mysterious villain named Fracture chasing him? Can Supergirl discover Comet’s true identity and figure out the reason he’s on the run? Find out in SUPERGIRL BOOK THREE.

Supergirl (1996-2003)
The Girl of Steel of the post-CRISIS ON INFINITE EARTHS world in her own ongoing series! Who is Linda Danvers and what is her connection to Superman and can she prove she deserves to wear the "S"? Superstar author Peter David chronicles the new adventures of Supergirl!

Supergirl (2005-2011)
Superman long believed he was the sole survivor of the destruction of Krypton...until he met Kara Zora-El, who would become Supergirl! The Girl of Steel has had many secrets, and more secret identities, but she remains one of the DC Universe's greatest female heroes!
Aquaman (1994-2001)
The King of the Seas stars in his very own series written by the legendary Peter David (SUPERGIRL, HULK). Whether on land or in the sea, Aquaman battles against foes with a whole-new look and a whole-new status quo! 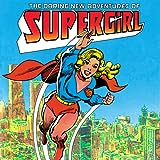 The Daring New Adventures of Supergirl (1982-1984)
Supergirl, as Linda Danvers, moves to Chicago to begin a new life as a student at Lake Shore University. She gets a new home there and makes new friends and also meets a new villain in "A Very Strange and Special Girl."

Young Justice (1998-2003)
Meet the newest super team to hit the DC Universe: Young Justice! Not quite the Justice League and not yet Teen Titans, these youthful sidekicks to the heroes of the DCU band together for adventures and heroics of their own. Featuring Superboy, Robin, Impulse, Wonder Girl and more!