Spider-Man: Son Of The Goblin

Spider-Man: Son Of The Goblin

In his father's eyes, Harry Osborn was never good enough. Harry's pal, Peter Parker, was truly the type of son Norman Osborn wanted - studious, inventive, strong-willed and industrious. In contrast, Harry had always wilted under life's pressures and the strain of his father's domineering influence, unable to live up to Norman's expectations. Unfortunately, Harry remained unaware of his father's dark side as the Green Goblin until it was too late. Witnessing Norman's apparent death in battle with Spider-Man, Harry was driven to the brink of insanity. Assuming his late father's identity, he began a descent into madness that would haunt him his entire life; only in death could he finally find peace. Witness the startling tale of Harry's tragic demise in this thrilling collection of classic Spider-Man stories!
See More See Less 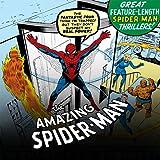 Peter Parker, The Spectacular Spider-Man (1976-1998)
Peter Parker and his clone Ben Reilly join forces in an effort to defeat the Traveler!
Fantastic Four (1961-1996)
Meet Marvel's First Family: Mr. Fantastic, the Invisible Girl, the Human Torch, and The Thing. In this first issue, the FF must confront the menace known as the Mole Man and his giant underground monsters, as they attack atomic plants all over the world.
Incredible Hulk (1962-1999)
Is he a man, monster or both? It's the Incredible Hulk, born of a gamma blast that scientist Bruce Banner was caught in.
Avengers (1963-1996)
The first of a star-studded series of book-length epics featuring some of earth's greatest super-heroes! Brought to you by the legendary creative team of Stan Lee and Jack Kirby!