The classic Harvey Comics character returns! After learning of a long lost treasure buried deep beneath the waters of the south Pacific south, Richie and the gang investigate, only to learn that there are other interested parties privy to the prizes, including a mysterious enemy and his band of modern day pirates!

The Disney Masters Collection
When Mickey’s town is hit by a blizzard of strange glowing snow, everyone thinks it’s a publicity stunt. But genius Dr. Einmug knows better: Pegleg Pete is on the loose with Einmug’s weather-control secrets! Only Mickey and Einmug’s mysterious companion ― the odd little Atomo Bleep-Bleep ― can save the day before a poison rainstorm wipes Mouseton off the map! Romano Scarpa (1927–2005 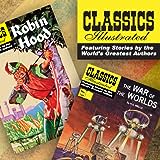 Classics Illustrated
Classics Illustrated is a comic book series featuring adaptations of literacy classics such as Moby Dick, Alice in Wonderland, and The Three Musketeers. Created by Albert Kanter, the series began publication in 1941, and finished its run in 1971, producing 169 issues. For thirty years, from 1941 to 1971, Classics Illustrated (originally known as CLASSICS COMICS) introduced adults and children of a