Quantum and Woody are the world's worst superhero team. Archer & Armstrong are a mismatched pair of conspiracy-busting adventurers. When a mysterious force collides with these ill-suited and irresponsible "heroes," they're in for a cross-country race through the darkest corners of American mythology…and all hell is bound to break loose. Can two busted pairs become four of a kind in time to defeat the Hobo King, save the day, and make it back home for happy hour? Let's hope so...'cause these guys make a really, really bad team. (And you don't even want to know about the Goat.) 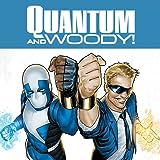 Quantum and Woody (2013- )
Once upon a time, Eric and Woody Henderson were inseparable. Adopted brothers. Best friends. Brilliant minds. Years later, they are estranged siblings, petty rivals, and washed-up failures. But when their father's murder leads them into the throes of a life-altering scientific accident, Eric and Woody will find themselves with a whole new purpose - and a perfectly legitimate reason to wear costume

The Delinquents (2014)
Confrontation! Devastation! Inebriation! (And the lost secret of the hobos too!) Oh dear God no, you'd better get out of the way...because here come the Delinquents! Quantum and Woody are the world's worst superhero team. Archer & Armstrong are a mismatched pair of conspiracy-busting adventurers. When a mysterious force collides these ill-suited and irresponsible "heroes" for a cross-country race
Archer & Armstrong (2012- )
After years of meditation and training, 18-year-old Obadiah Archer has been dispatched to New York City to carry out the sacred mission of his family's sect-- kill the booze-addled immortal known only as Armstrong and convene a new world order! But as this underage assassin stalks his prey, he'll soon find that both hunter and hunted are just pawns in a global conspiracy stretching back five mille
Shadowman (2012- )
With digital exclusive content including original art! There are a million dreams in the Big Easy. But now its worst nightmare is about to come true. As the forces of darkness prepare to claim New Orleans as their own, Jack Boniface must embrace the legacy he was born to uphold. As Shadowman, Jack is about to become the only thing that stands between his city and an army of unspeakable monstr
Q2: The Return of Quantum and Woody (2014)
The most demanded return in comics is finally here! The original Quantum and Woody are back! Legendary creators Christopher Priest and M.D. Bright return to one of the most acclaimed series of the modern era for an all-new mini-series event! Whatever happened to the world's worst superhero team? Twenty years past their prime, the unlikely crime-fighting duo known as Quantum and Woody (not a cou