Elves, Gods, and Over-Minds - Oh, my! What else can you expect when your team's lineup consists of a sorcerer, a gargoyle, a valkyrie, a pair of X-men, a former model, the Son of Satan and more of Marvel's wildest warriors? Far-out fantasy the likes of which you've never seen, that's what! Guest-starring Odin, the New Mutants and more!
See More See Less 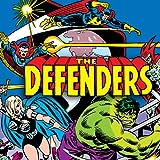