Collects Monsters On The Prowl, Devil Dinosaur, Fin Fang Four, Where Monsters Dwell And Material From Tales To Astonish #1, Journey Into Mystery #62, Strange Tales #89 And Tales To Astonish #10 - And The Marvel Monsters: From The Files Of Ulysses Bloodstone (And The Monster Hunters) Handbook.

Marvel's monsters unleashed in four timeless tales by today's hottest creators! In MONSTERS ON THE PROWL, it's the Hulk, the Thing, Giant-Man and the Beast vs. a tidal wave of classic creatures when the Collector inadvertently lets loose Droom, Grogg, Goom, Rombuu, Grattu and more on New York City! In DEVIL DINOSAUR, two young Celestials debate prehistoric Earth's superior life form. But when the ferocity of Devil Dinosaur proves no match for the opposition, a savage from the future is brought back for a battle you thought you'd never see: Hulk vs. Devil Dino! In FIN FANG FOUR, four giant monsters - incarcerated for years for their crimes against humanity - now find themselves shrunk to human size and working at the home of the very people who captured them: the Fantastic Four! Meet Googam, Son of Goom; Elektro; Gorgilla; and Fin Fang Foom! But when Goom's mad plan to rescue his father goes awry, the quartet must put aside their differences and become - the Fin Fang Four! And in WHERE MONSTERS DWELL, witness the terror of Monstrollo, the horror of Manoo and the fright of Bombu! 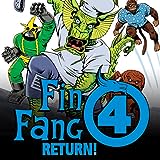 Fin Fang Four (2008-2009)
There was a time when giants walked the Earth! Monstrous creatures! Products of science gone MAD!!! But what happens when some of these terrible titans try to play nice? Find out as Googam, Elektro, Gorgilla and the purple-pantsed Fin Fang Foom himself do the unthinkable and become functioning members of society. Well, not TOO functional... 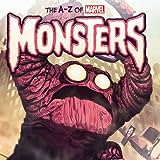 The A-Z of Marvel Monsters
Collects material from Tales to Astonish (1959) #15, 16, 22; Tales of Suspense #13, 18, 23; Journey into Mystery (1952) #57, 62 & Kirby Monster variant covers. Learn your ABCs the Jack Kirby way with his most monstrous creations! From the legendary behemoths that stalked a world before super heroes, to the titans that terrorized the Marvel Universe, 26 of Kirby's most memorable monsters have be 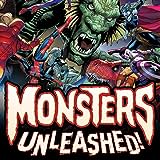 Monsters Unleashed (2017)
THE EPIC BATTLE MARVEL FANS HAVE BEEN WAITING FOR, DRAWN BY TODAY'S GREATEST ARTISTS!!! It's all hands on deck with the AVENGERS, CHAMPIONS, GUARDIANS, X-MEN and the INHUMANS as they clash with monstrous threats that threaten to destroy every corner of the Marvel Universe. Who are the LEVIATHONS? Who controls them? How can they be stopped before Earth becomes another tragic, barren world in their 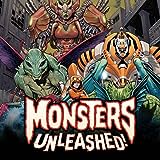 Monsters Unleashed (2017-2018)
THE FIRST FANTASTIC ISSUE OF MARVEL'S NEWEST HEROES! From acclaimed writer CULLEN BUNN, known for his work on DEADPOOL, UNCANNY X-MEN and more, comes a high-action sci-fi series centered on a team of monstrous and monstrously massive do-gooders including KID KAIJU, AEGIS, SLIZZIK, SCRAGG, HI-VO AND MEKARA.. Now teaming up with vampire-hunter ELSA BLOODSTONE, the series unfolds as the team takes on