A threat from beyond the stars brings the World's Greatest Heroes together with the World's Newest Heroes to stop a globe-spanning invasion of Earth in this 6-issue miniseries! DC Comics' JUSTICE LEAGUE OF AMERICA joins forces with Teshkeel Comics' THE 99 to create an unstoppable army of super-powered beings the likes of which the world - and comic shops - have never seen before! 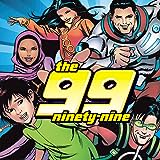 THE 99
THE 99 is the worldwide comic sensation praised by President Obama and called by FORBES, "one of the top 20 trends sweeping the globe." Now a major animated TV series, THE 99's heroes each possess a magical Noor stone of power and work together in the unending battle of good over evil.