It's day one of a new role for Tony as he takes up the mantle of the missing Nick Fury to lead S.H.I.E.L.D. into the 21st century! After the events of Civil War, Tony leads the Avengers Initiative into a whole new era for Marvel.
See More See Less

Iron Man: Director of S.H.I.E.L.D.
TONY STARK, DIRECTOR OF S.H.I.E.L.D. It's day one of a new role for Tony Stark as he takes up the mantle of the missing Nick Fury to lead S.H.I.E.L.D. into the 21st Century! But what does this mean for the future of Iron Man?

Avengers: The Initiative (2007- 2010)
The Civil War is over and from now on, this is the new face of the Marvel Universe - The Initiative! Whose side were you on? If you were pro-registration, then there's one hell of a price to pay. You're in the army now. Every last one of you. Fall in with Yellowjacket, War Machine, She-Hulk, Justice and The Gauntlet as they train the heroes of tomorrow for the super-powered conflicts of today!
Invincible Iron Man (2008-2012)
IRON MAN! You know you love him! And as the summer's most anticipated movie boot-jets its way into theaters, here's the perfect jumping-on point for new readers and Iron Man fans alike! Tony Stark - Iron Man, billionaire industrialist and director of S.H.I.E.L.D. - faces the most overwhelming challenge of his life. Ezekiel Stane, the son of Tony's late business rival and archenemy Obadiah, has set
Iron Man (2004-2007)
It's the beginning of a new era for Iron Man as renowned scribe Warren Ellis joins forces with digital painter Adi Granov to redefine the armored avenger's world for the 21st century-a landscape of terrifying new technologies that threaten to overwhelm fragile mankind! What is Extremis, who has unleashed it, and what does its emergence portend for the world? 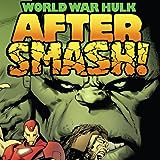 World War Hulk: Aftersmash
Heroes and monsters rise and fall as the events of WORLD WAR HULK reverberate through the blasted ruins of New York City in a massive story featuring the Warbound, the Renegades, Heroes for Hire, Iron Man, Tom Foster, and Damage Control.