WHY BOOM! LOVES IT: If you could take a pill and travel back to any time in your life, where would you go? Writer Shaun Manning hooked us with his fresh sci-fi thriller, illuminating the dangers of living in the past.

WHY YOU'LL LOVE IT: If Richard Linklater (A SCANNER DARKLY) directed a season of BREAKING BAD written by J. J. Abrams, it'd probably be pretty close to what Manning and Wieszczyk have built-a tripped-out psychological thriller full of scrappy anti-heroes and some of the most villainous scum of all space and time.

WHAT IT'S ABOUT: When a man from the future recruits average retail worker Andrew Smith to help him create a drug that will allow him to travel through time, Andrew thinks he's found the way to erase all his problems. However, the power of nostalgia proves to be the strongest of drugs, creating an epidemic of addiction with Andrew as its unwitting kingpin.
See More See Less

The Black Dahlia
"What's to Love: This gripping graphic novel adaptation of the highly acclaimed book by James Ellroy, The Black Dahlia, delves deeply into one of the most haunting unsolved crimes in American history. Award-winning filmmaker David Fincher (Gone Girl, Zodiac) and acclaimed storyteller Matz (The Killer) worked at length to preserve much of Ellroy's original dialogue while bringing the stark images o
Jeremiah Harm
From the original Lobo writing team of Keith Giffen and Alan Grant! But put your "bastiches" away, this ain't no comedy - just hard hitting science fiction action with a gritty tone and a brutal anti-hero as the lead! When three of the galaxy's most fearsome criminals escape confinement on a prison planet and wind up on Earth, the authorities have no choice but to free the most wanted man in the u
The 7 Deadly Sins
SEVEN DEADLY SINS. ONE DEADLY MISSION. 1857. Texas. A group of death row criminals is recruited by a Mexican priest for a suicide mission into Comancheria. 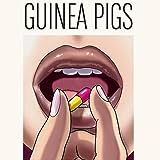 Guinea Pigs
A pharmaceutical testing center. Three human test subjects. Three pills a day for twenty-one days. And at the end, a check for 3,500 euros. Our three guinea pigs begin the test thinking they're in it for the money. Three weeks later, they leave transformed. Have their dreams come true, or will their lives become living nightmares?