Generation Zero managed to survive their first mission, and now duty has called on them to venture deep inside a perilous dimension only known as the Heroscape to see the world through a new set of eyes! They’ll discover their friends’ biggest secrets, their enemies’ darkest fears, and their town’s sinister connection to this imagination-fueled reality. But just because the Heroscape is imaginary, doesn’t mean it can’t kill you… And, from anime-inflected zombie hordes to psychedelic sci-fi warriors, all of Rook, Michigan’s most deeply buried fantasies are about to come roaring out of your daydreams!

Dream big because New York Times best-selling writer Fred Van Lente (IVAR, TIMEWALKER) and acclaimed artists Diego Bernard (X-O MANOWAR) and Javier Pulido (Daredevil) and are gearing up to send Valiant’s temperamental teenage time-bombs blasting out of the suburbs and into their most grisly adventure yet! 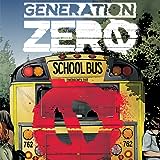 Generation Zero
Because you demanded it! Exploding out of the pages of HARBINGER WARS comes AN ALL-NEW ONGOING SERIES starring GENERATION ZERO from New York Times best-selling writer Fred Van Lente (IVAR, TIMEWALKER) and blockbuster artist Francis Portela (FAITH)! If you have a problem... If your parents won't help... And if your cause is worthy... Log onto network #ZERO...because Generation Zero is listening

Harbinger Renegade
Anyone you know could become a psionically powered "harbinger" with the potential to reshape the course of human history. Your neighbor. Your boss. Your best friend. Your kids. Six months ago, a secret team of renegade whistleblowers leaked the existence of these extraordinarily dangerous individuals to a stunned world. Today, all across the country, crude, DIY psiot activation attempts have le
A&A: The Adventures of Archer & Armstrong
GET SMASHED...OR BE SMASHED! Valiant's (somewhat) dynamic duo are going "IN THE BAG" for AN ALL-NEW ONGOING SERIES from rising star Rafer Roberts and comic book superstar David Lafuente! Meet Armstrong: Since the ancient city of Ur, this immortal adventurer has spent the last 7,000 years drinking and carousing his way through history alongside some of the greatest merrymakers the world has eve
Savage
Fifteen years ago, the world's most famous soccer star and his former supermodel wife –pregnant with their unborn child – disappeared without a trace. The world believes they are dead... But, in reality, their private jet crash-landed on a mysterious, unknown island ruled by by prehistoric creatures from another time... This is the story of how they lost their humanity. This November, ac
Wrath of the Eternal Warrior
For five millennia, the Eternal Warrior has shaped history at the end of his sword. He's razed empires, toppled civilizations, and broken armies as an immortal soldier in service to the Earth. But now, the Eternal Warrior has been torn from the world he once protected and finds himself stranded in a hostile alien landscape unlike any he's faced before. Separated from his earthly environs, can h