This all-new adventure for Aspen’s preeminent hero sees her attempt to navigate an ever-changing world where The Blue are not only present above the surface—but exploited in new and dangerous ways. When a rival nation to The States decides to take control of the global landscape by tapping into the power of The Blue, Aspen Matthews discovers that a new adversary has risen to challenge the notion that she is the most powerful person on the planet—and humanity may suffer the consequences!

Michael Turner and Aspen Comics’ flagship title commemorates its landmark twenty years since its debut in grand fashion! The superstar creative team of Ron Marz (Green Lantern, Witchblade) and Siya Oum (Lola XOXO) are on board to deliver Fathom, and the iconic heroine, Aspen Matthews, to a new generation of readers as well as loyal fans alike!
See More See Less 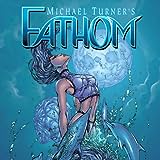 Fathom
There are two worlds. The one we know, and the one below. Aspen Matthews was a marine biologist who, in a failed experiment, discovered that she is actually a water nymph, able to live and thrive beneath the water.

Soulfire
"The Day the Magic Died" - Your first glimpse into the world of Soulfire has finally arrived. Countless ages ago, battles raged and wars were lost, but one lone heroine fought on. Struggling to prevent a time of magic and wonder from becoming extinct, her fight would span centuries, leading her to the one person who could help change the future forever. Introducing Grace, the startling and powerfu
Charismagic
The forces of magic have returned—and this time no magical being is safe! Aspen’s magical action-adventure series returns for its epic third volume! Las Vegas magician Hank Medley and his talking cat Sparkles attempt to put the pieces of their life back together, as society has taken a hardline approach to magic and its destructive results. Meanwhile, Sudana uncovers a more sinister plot brewi
Overtaken
Picking up from the shocking events of issue #1... after months of dead ends and uncooperative authorities, Will Harden focuses his desperation to find his missing wife and turns to an unlikely source to help locate her...but is it already too late?? As he begins to unravel the truth, Harden will discover that the answers he seeks are far out of this world! Written and created by Frank Mastromaur
Legend of The Shadow Clan
Aspen's Ten Year Anniversary kicks off with the debut of LEGEND OF THE SHADOWCLAN! Meet the Arashi family. They are like any other family living in the city: kids in school, parents working to make ends meet. But unbeknownst to even them, their ancestors held a dark secret: they were a clan of ninja in feudal Japan, in the employ of a prominent leader. But when that leader was murdered under myst