Combining Fathom: Kiani volumes 1 - 3 AND Fathom: Dawn of War (including zero issues!), this massive volume is bursting with all your favorite Kiani content! 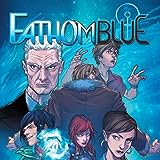 Fathom: Blue
An unlikely team of BLUE rise in this BRAND NEW Fathom series! They have all risen from beneath the surface. Each for a different purpose yet united in their exile from their homelands below. Looking to blend in-out of sight--amongst humans unaware of their true potential. However, one man, who has spent the better part of his life hunting the Blue, is keenly aware of their presence-and he will st
Fathom: Kiani Vol. 4
Kiani has finally reunited with her sister, Anika, and the Fathom Universe will never be the same again! Following the catastrophic destruction of the Volna, the Russian Government's secret Blue research facility, the United States has decided to take action against the rising threat of the Blue. However, in Africa, Kiani and Anika discover that their family bond is stronger than any one army-as t
Fathom: Blue Descent
Memories of the past come crashing into the present in this exciting all-new Aspen mini-series, FATHOM: BLUE DESCENT! Aspen Matthews is the link between the world we know and the world below, but the secrets of her past have always remained shrouded in mystery-until now! FATHOM: BLUE DESCENT journeys back to the life of Aspen's true parents, members of the underwater race known as the Blue, and th
Fathom: The Elite Saga
Aspen Matthews is attempting to find solace above the surface by distancing herself from the demons of her past. Kiani is imprisoned within the underwater capitol city of Muria. And Killian is in search of his missing wife Anya, and his newborn child Anika, who fled their home in his absence. Yet, all of their paths will soon collide as the child's true nature could lead to immense power falling i