They're BACK! 25 years after Topps' original DINOSAURS ATTACKS! trading cards took a bite out of candy counter sales, the original Eclipse graphic novel written by DA creator Gary Gerani returns, this time released in its entirety! With pencils by Herb (G.I. JOE) Trimpe and paintings by veteran illustrator Earl Norem, the entire story will be released as five comic books, with all the blood-curdling trimmings. So put world-conquering Martians aside for a bit and relish the time-tilted melodrama and wild humor of DINOSAURS ATTACK! -- the ultimate nightmare is now a reality from IDW!

Jurassic Strike Force 5
Awakened from his 65 million year hibernation, the evil alien overlord Zalex is ready to resume his conquest of the universe and he's starting with the earth. Backed by his army of evil, mutated Dino-soldiers there's nothing that can stop him...nothing but Dino StrikeForce! Don't miss the seminal issue in the first original series under Zenescope's Silver Dragon Books imprint. 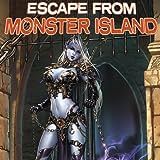 Escape From Monster Island
Years ago, unbeknownst to the public, the U.S. government built a walled city on an abandoned island in the Pacific Ocean. The purpose of this city was to house an experimental testing facility for a multitude of monsters that had been captured over the years. But in 2012 disaster struck and the island was evacuated and is now overrun by a multitude of different terrifying creatures and beings. Bu
Giant Monster
The year is 2013. Astronaut Don Maggert's first solo manned space flight has him disappear in the grip of an intergalactic horror. Returning to earth, he's been transformed into something that will throw the entire planet into peril! Featuring oversized Kaiji action and giant monster throwdowns! 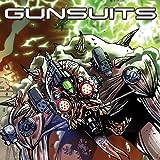 Gunsuits
Soldiers are crowded around screens watching for victory. No, it's not a news broadcast: each of the screens shows a different world, a different reality, and a different way for a battle to play out between a gunsuit containing Cassandra "Potts" Potter and massive biomechanical monsters. These monsters have come through wormholes all over the globe from an alternate evolutionary timeline. Time af