You've never seen marital problems like this! It was a whirlwind romance - Deadpool traveled across the world with Shiklah, fighting all sorts of threats at her side, and finally married her as a way to thwart the evil vampire lord, Dracula! But the honeymoon is over, and reality has set in. Wade's bride is a demon succubus and the queen of a monstrous kingdom hidden beneath Manhattan. So when this Monster Metropolis declares war on the surface world, Deadpool's loyalties are divided between his husbandly duties and the role he's crafted for himself as a hero. Can Spidey and the Mercs for Money help him decide whose side he is on? Brace yourself for a domestic dispute that's really going to break some things up!
See More See Less 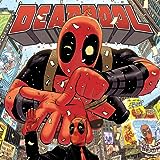 Deadpool (2015-2017)
He's annoying. He's dangerous. He smells terrible. But the public loves him. That's right- the Merc with the Mouth may make money for missions of murky morality...but he's become the most popular hero in the world for it. Eat that, Spidey! The world belongs to Deadpool. The fan favorite team of Gerry Duggan and Mike Hawthorne return to bring Deadpool into his most successful adventures yet!

Despicable Deadpool (2017-2018)
Collects Despicable Deadpool #287-300 and the second set of Deadpool Secret Comic Variants. His days as a hero are over — now Deadpool is despicable! And what could be more despicable than…killing Cable?! That's right, Wade Wilson is out to prove himself a merciless merc by offing his best friend! But that's not the only item on his evil agenda! Deadpool has a lot of unfinished business, an
Deadpool (2012-2015)
Dead presidents from George Washington to Gerald Ford have been resurrected, and that's bad. The world needs someone with the reputation, skills and plausible deniability to take out these com-monsters-in-chiefs... In Wade We Trust!
Deadpool Classic
Collects Deadpool (1993) #1-4, Deadpool (1994) #1-4, Deadpool (1997) #1. He's the Merc with a Mouth, Deadpool, and with sidekick Weasel in tow, he sets out on a quest for romance, money, and mayhem - not necessarily in that order - only to learn he's being hunted by an enemy he killed years before! As if that isn't enough, the Juggernaut crashes into the action, and it's the unstoppable vs. the un
Spider-Man/Deadpool (2016-2019)
Because you demanded it! The Webbed Wonder and the Merc with a Mouth are teaming up for their first ongoing series ever! It's action, adventure and just a smattering of (b)romance in this episodic epic featuring the World's Greatest Super Hero and the star of the World's Greatest Comics Magazine. Talk about a real dynamic duo!