“SAVE YOUR GENERATION,” Part Two
A reunion of old friends and old business that must be handled. A glimpse into the past. The salvation of the wreckage of the future.
See More See Less 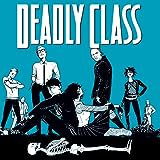 Deadly Class
It's 1987. Marcus Lopez hates school. His grades suck. He has no money. The jocks are hassling his friends. He can't focus in class, thanks to his mind constantly drifting to the stunning girl in the front row and the Dag Nasty show he has tickets to. But the jocks are the children of Joseph Stalin's top assassin, the teachers are members of an ancient league of assassins, the class he's failing i

Ascender
"THE HAUNTED GALAXY," Part One Powerhouse creative team JEFF LEMIRE and DUSTIN NGUYEN launch an all-new sequel series to DESCENDER with the launch of ASCENDER! Set ten years after the conclusion of DESCENDER's storyline, magic has taken the place of machinery and the rules are very different indeed... Mila, the daughter of Andy and Effie from DESCENDER, spends her days exploring the lonely wilds o
Low
In the far distant future, the sun's premature expansion has irradiated Earth, sending humanity to the lowest depths of the seas, hidden within radiation-shielded cities, while probes scour the universe for inhabitable worlds to relocate to. After tens of thousands of years, a single probe returns, crashing on Earth's surface, a now-alien place no human has seen for many millennia. Frequent collab
Birthright
For the Rhodes family, losing their son was the most devastating thing that could've ever occurred... but it couldn't prepare them for what happened when he returned.
Black Science
Grant McKay, former member of The Anarchistic Order of Scientists, has finally done the impossible: He has deciphered Black Science and punched through the barriers of reality. But what lies beyond the veil is not epiphany, but chaos. Now Grant and his team are lost, living ghosts shipwrecked on an infinite ocean of alien worlds, barreling through the long-forgotten, ancient, and unimaginable dark