Checkers VS the Sewer Zombies
Checkers battles against the hideous ranks of the undead until he realizes he is being stalked by the ultimate terror from beyond the grave, the Zombie Queen.
Originally published in Meatbucket Magazine #1, crossing over with the storyline of it's 'sibling' comic 'VioleNt Streak' #0, Checkers' World #0 is finally released as it's own issue here!
See More See Less 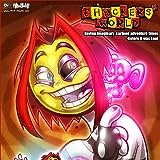 Checkers' World
Everyone's favourite sewer-dwelling crazy person! Join Checkers in his wild cartoon adventures that may or may not be all in his head. Part comedy and part social-commentary, Checkers travels through wondrous locales and meets a range of interesting and often twisted characters to find that he may be the most sane person out there!