The group makes a sober discovery in Los Angeles, as Hank's agent and best friend Kenny painfully realizes the differences between humans and magical beings could kill him--and put an end to their quest to end Serké's invasion. However, their problems are much larger in scale than they are aware of, as the dark shaman has summoned his deadliest servant of chaos--Torgan, the magical lion demon of flame and rage!

Featuring a returning cast of Charismagic's favorite characters along with several new and astonishing faces and creatures of magic, this new volume of CHARISMAGIC is a perfect jumping-on point for all!
See More See Less 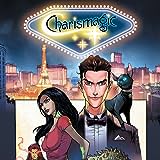 Charismagic
The forces of magic have returned—and this time no magical being is safe! Aspen’s magical action-adventure series returns for its epic third volume! Las Vegas magician Hank Medley and his talking cat Sparkles attempt to put the pieces of their life back together, as society has taken a hardline approach to magic and its destructive results. Meanwhile, Sudana uncovers a more sinister plot brewi

Legend of The Shadow Clan
Aspen's Ten Year Anniversary kicks off with the debut of LEGEND OF THE SHADOWCLAN! Meet the Arashi family. They are like any other family living in the city: kids in school, parents working to make ends meet. But unbeknownst to even them, their ancestors held a dark secret: they were a clan of ninja in feudal Japan, in the employ of a prominent leader. But when that leader was murdered under myst
Shrugged Vol. 1
A unique tale of the human intellect, the heart's desires, and the reason behind your every decision! However, these "reasons" aren't just in your head, they're real, and they want out! From the butterflies in your stomach to the zany thoughts running through your mind, you won't believe just how influential (and dangerous) these feelings can be.
Dellec
SOMETIMES, EVIL SHOULD BE AFRAID. His name is DELLEC, and it all starts right here! One man amidst a blur of immorality, but his mission is clear-destroy the forces of evil wherever they may flourish, even if it means taking on the very being that created mankind itself! The action-packed first issue takes off full throttle, as DELLEC, on a quest for vengeance and redemption, jumps headfirst into
Overtaken
Picking up from the shocking events of issue #1... after months of dead ends and uncooperative authorities, Will Harden focuses his desperation to find his missing wife and turns to an unlikely source to help locate her...but is it already too late?? As he begins to unravel the truth, Harden will discover that the answers he seeks are far out of this world! Written and created by Frank Mastromaur