The special digital-exclusive one shot story story features the origin story of Sparkles, the popular talking cat from the pages of Aspen's magical action-adventure series Charismagic! Join Sparkles as she discovers the true meaning of independence and loneliness while encountering a horrific creature of magical descent, and her very first encounter with Hank Medley! Aspen and Charismagic fans will not want to miss this exciting tale, with all of Aspen's proceeds going to the Make-A-Wish Foundation! 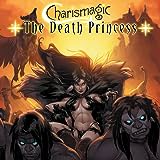 Charismagic: The Death Princess
Orlana, spoken of in hush tones as the "Death Princess", rules over all who oppose her reign. Not by force, but through the most dangerous of all magical powers-the ability to control minds! Under the Death Princess' shadow of dominance and fear, the humans of Earth find themselves at risk of their civilization falling completely under her rule forever! Until Kon, a young but powerful wizard finds
Charismagic
The forces of magic have returned—and this time no magical being is safe! Aspen’s magical action-adventure series returns for its epic third volume! Las Vegas magician Hank Medley and his talking cat Sparkles attempt to put the pieces of their life back together, as society has taken a hardline approach to magic and its destructive results. Meanwhile, Sudana uncovers a more sinister plot brewi
The Four Points
Something dark is coming... Throughout history, oddities have remained hidden away within the fabric of societies across the planet. However, in recent years these unexplained phenomena have begun to emerge with a vengeance...Enter Gia Sorentino. They thought she was crazy, and locked her away from the rest of the world. Yet, following a family tragedy, she has inherited an empire--and
Shrugged Vol. 2
You think you're prepared, but you're not. You've been decisive in your actions up to this point, but now things have been turned upside down. You feel you've conformed your mindset and are ready to accept what you're about to experience, but you haven't. That's because SHRUGGED is back and ready to blow your mind! Theo and his friends are entering their final year of high school, and even though