Bloodshot Vol. 6: The Glitch and Other Tales

A murderer's row of comic talents – Peter Milligan (Hellblazer), Duane Swierczynski (Birds of Prey), B. Clay Moore (JSA: The Liberty Files), Howard Chaykin (American Flagg), Lewis LaRosa (Punisher MAX), Manuel Garcia (Black Widow), and many more – come together for a collection of stories from throughout the bullet-riddled history of Valiant's most brutal and relentless hero!

Meet the man behind Bloodshot – or is he? – when one soldier's untapped killer instinct takes over in "The Glitch"! Then, Russian superpies don't die easy as "Sleepers" takes Bloodshot deep into the biting cold of a former Soviet state and face to face with an enemy eerily similar to himself.

Plus: the origin of Bloodshot retold, Howard Chaykin's "Protocol", and much more!

Collecting BLOODSHOT #24, the oversized BLOODSHOT #25 anniversary extravaganza, and an exclusive Director's Cut of BLOODSHOT #1 – featuring a never-before-seen, behind-the-scenes look inside the script, art, and character designs of the blockbuster first issue that set Bloodshot in motion!
See More See Less 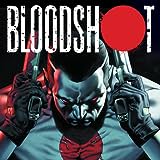 Bloodshot (2012- )
With EXCLUSIVE DIGITAL CONTENT including original art! Your name is Angelo Mortalli. Your brother is trapped behind enemy lines and on the verge of-- no. That's not right. Your name is Raymond Garrison. You've retired from the dangers of the field, but a desperate plea from your oldest friend plunges you into a vicious firefight that-- no. That's not right, either. You are Bloodshot. You are the

Bloodshot Reborn
From New York Times best-selling writer Jeff Lemire (THE VALIANT, Green Arrow) and red-hot rising star Mico Suayan (HARBINGER, Moon Knight), VALIANT NEXT delivers an all-new ongoing series for Valiant's most unrelenting hero! Bloodshot's nanites made him a nearly unstoppable killing machine. His enhanced strength, speed, endurance, and healing made him the perfect weapon, and he served his mas
Harbinger (2012- )
Read minds. Bend steel. Break all the rules. Teenager Pete Stanchek is out of work, on the skids, and-- unbeknownst to him-- a psionic-powered "harbinger" with the potential to reshape the course of human history. Toyo Harada is a wealthy business magnate, a respected philanthropist and the most powerful harbinger of all-- or so he thought. As they forge an uneasy alliance, will Harada offer Pete
X-O Manowar (2012- )
It's the comic book event a decade in the making! The all-new Valiant Universe kicks off with a landmark, oversized # 1 issue of X-O Manowar by New York Times best-selling author Robert Venditti (The Surrogates, The Homeland Directive) and Eisner Award-winning artist Cary Nord (Conan)! Born into battle, Aric of Dacia -- heir to the throne of the Visigoth people -- has never known peace. After a br
Harbinger Wars
A decades-old secret is about to put BLOODSHOT and HARBINGER on an inescapable collision course - and, soon, the most powerful forces in the Valiant Universe will be drawn into a battle without sides, without rules, and without mercy.