Tensions escalate and war comes to Gotham City when Batman is drawn into a skirmish between rival gangs. As Gotham's biggest gang battle ignites, Batman must call on all his available allies-Oracle, Batgirl, Nightwing, Orpheus, Onyx and Tarantula-to preserve life and contain the chaos while trying to determine who started this outbreak of violence. Plus, Tim Drake must abandon his role as Robin and Batman gets an unexpected (and unwelcome) replacement in the form of Spoiler. 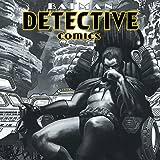 Detective Comics (1937-2011)
Bruce Wayne has trained his body beyond the peak human perfection; he's trained his mind to focus on minute details to deter criminal enterprises. As the Batman, he's a symbol of terror, striking at the hearts of criminals and villains across the globe.

The Brave and the Bold (1955-1983)
Featuring characters old and new and some of the most bizarre, and oft times inspiring team-ups from across the DC Universe! Batman and the Atom! The Justice League of America! The Teen Titans! They are the heroes of the DC Universe. They are the BRAVE AND THE BOLD!
Batman (1940-2011)
Born into affluence, Bruce Wayne was fundamentally changed the night his parents were murdered before his eyes. From that day on, Bruce trained his mind and body beyond peak human perfection to become Batman--a symbol of terror, striking at the hearts of criminals and villains across the globe.
Batman: Legends of the Dark Knight
A rotating roster of the world's top comic book creators deliver unique tales starring Batman in this acclaimed anthology series! Spanning the career of the Dark Knight, these stories celebrate all aspects of the World's Greatest Detective.