Bruce Wayne is out of commission, but Batman must continue!

A new era begins as a new Batman arrives in Gotham City. Bruce Wayne, battle-broken and unavailable for field duty after an epic showdown with Bane, has appointed a new Dark Knight as his temporary surrogate. Jean-Paul Valley (a.k.a. Azrael) has assumed the role of the Caped Crusader, but without his mentor’s integrity and experience, he quickly spins out of control. His undisciplined behavior is especially worrisome to both Robin and Commissioner Gordon. 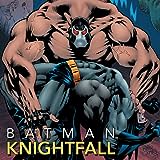 Batman: Knightfall
The Dark Knight's greatest enemies have all simultaneously escaped from Arkham Asylum and are preying on Gotham City. With his city under siege, Batman pushes his body to the limit as he takes on The Joker, the Mad Hatter, Poison Ivy, Killer Croc, The Riddler and the Scarecrow. But things get much worse when Bane, the man behind all the madness, confronts an exhausted Batman...

Batman: No Man's Land
After suffering a cataclysmic earthquake, the U.S. government deemed Gotham City uninhabitable. Months later, those that refused to vacate "No Man's Land" live amidst a citywide war. But with the return of the vigilante, Batman, and the appearance of an enigmatic new Batgirl, justice returns to Gotham.
Superman: The Death of Superman
The story that drew national media attention and killed comics' most recognizable hero. When a hulking monster emerges from an underground resting place and begins a mindless rampage, the Justice League is quickly called in to stop the colossal force of nature. But it soon becomes apparent that only Superman can stand against the monstrosity known as Doomsday.
Batman: Shadow of the Bat
Nightwing tries to free Batman from Arkham Asylum, only to discover why he's really trapped inside. Meanwhile, Jeremiah Arkham succumbs to his heritage of madness! "The Last Arkham" part 3.
Batman: Legends of the Dark Knight
A rotating roster of the world's top comic book creators deliver unique tales starring Batman in this acclaimed anthology series! Spanning the career of the Dark Knight, these stories celebrate all aspects of the World's Greatest Detective.