Avengers: Once An Invader

Who is the mysterious figure that claims to be Captain America, and what mission is he recruiting the super-soldiers of past wars to accomplish? As the new Invaders hit the battlefield, Namor the Sub-Mariner marshals his forces against a crucial island nation! But whose side will the Avengers come down on?
See More See Less 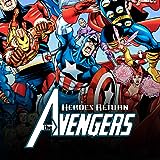 Iron Man (1998-2004)
It's Thor vs Iron Man! The Thunder God vs the Armored Avenger! Will Captain America choose a side? And what part does Dr. Doom play in it all?
Avengers (2010-2012)
Kang The Conqueror has come from the future! Now, The Avengers must assemble to prevent a catastrophic threat from tearing apart the timestream. But who will answer the call?
Mighty Avengers (2007-2010)
The wait is over!! The Mighty Avengers assemble!! Gathered together to be the greatest Avengers team ever, but who picked them?? And why?? And which A-list Avengers villain returns, revamped and reloaded for the ultimate revenge. Big super hero adventures every month from the multi-award winning team of Bendis and Cho.
Avengers (1963-1996)
The first of a star-studded series of book-length epics featuring some of earth's greatest super-heroes! Brought to you by the legendary creative team of Stan Lee and Jack Kirby!