Prepare yourself for one of the most stellar creative periods in Avengers history! Roy Thomas, John Buscema, Gene Colan and Sal Buscema raise Earth's Mightiest Heroes to unheard-of heights with the debut of the Vision, an all-out battle with Ultron, and the introduction of Yellowjacket and an all-new Goliath! Then, Kang the Conqueror drops in from the 41st century, pitting our heroes against the Squadron Sinister in a cosmic chess match! As if one set of adversaries from across time wasn't enough, the Avengers must also battle the Captain America, Sub-Mariner and Human Torch of 1941! Also featuring the Black Panther vs. the Sons of the Serpent, the return of Quicksilver and the Scarlet Witch, and barbarian Arkon the Magnificent!
See More See Less 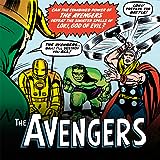 Avengers (1963-1996)
The first of a star-studded series of book-length epics featuring some of earth's greatest super-heroes! Brought to you by the legendary creative team of Stan Lee and Jack Kirby!

Fantastic Four (1961-1996)
Meet Marvel's First Family: Mr. Fantastic, the Invisible Girl, the Human Torch, and The Thing. In this first issue, the FF must confront the menace known as the Mole Man and his giant underground monsters, as they attack atomic plants all over the world.

Tales of Suspense (1959-1968)
Watch his awesome approach! Listen to his ponderous footsteps as he lumbers closer... closer... for today you are destined to encounter - THE INVINCIBLE IRON MAN!
Incredible Hulk (1962-1999)
Is he a man, monster or both? It's the Incredible Hulk, born of a gamma blast that scientist Bruce Banner was caught in.
Defenders (1972-1986)
The Defenders are cast across the globe in this explosive annual! In Washington D.C., Doctor Strange must convince the President that Nebulon’s Mind Control Movement is not in the public’s best interest. Power Man and Valkyrie investigate mysterious deaths in India, while Nighthawk and Red Guardian take on a violent faction in France!