First there were three: Octavia, Charlotte, and Rosalyn, a trio of badass hit-women who picked up the slack when the going got too real for other so-called top-level assassins. But things happened. Octavia hung up her semi-automatic for a semi-lucrative kidnapping insurance scam. Charlotte chose expensive Chardonnay, love, marriage and, until recently, a baby carriage. And Rosalyn? There's a lot of conspiracies, but according to the federal government, she's simply M.I.A. When a kidnapping hits too close to home, Octavia is forced out of retirement and back into the bounty-hunting business. Down two partners, she recruits her son Dominic and his boyfriend Taylor to aid and abet her in a semester of murder-based work study, where she'll teach them everything she knows (if she can get them to put down the video games, stop making out, and actually focus on the mission already). 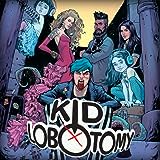 Kid Lobotomy
Meet Kid, the youngest descendant of a rich, demented hotelier named Big Daddy. Kid is the newly appointed manager of "The Suites," but his good looks and swagger can't hide a rough childhood of strange therapies and brain operations that have awakened inner demons and psychodramas. This of course makes him eminently quali ed to perform lobotomies. A failed rockstar/ successful madman gets one las
Punks Not Dead
As if being an awkward, bullied 15-year-old wasn’t enough, suddenly “Fergie” Ferguson can see ghosts. Well, one ghost specifically… a certain punk rocker named Sid. Sid’s spirit has been trapped in London’s Heathrow airport for 40 years, until the day he meets Fergie. Now Sid’s ghost is stuck to Fergie, and Fergie has to content with an unruly Ghost sidekick and some weird, uncontrol
House Amok
It’s the summer vacation from hell! Ten-year-old twin Dylan Sandifer and her family have fallen down a rabbit hole full of secret implants, conspiracy theories, Mandela effects, invaders, and organ thieves. As the attacks intensify, the Sandifers light out across the country in search of answers and salvation, blazing a bloody path of arson and murder.