Ash continues to explore the Deadite infested wastes of Detroit as he attempts to wrestle control of the world back from Evil Ash and his Deadite minions!

Evil Ash sits atop the remains of Detroit as the Chosen One (that's Ash to his friends) gathers his crew of mutants and misfits in a desperate attempt to remake the world into something slightly less dead and rotting! Will he be able to wrest control of the Deadite Kigdom from his worse half in time!?!?

Featuring another stunning script by James Kuhoric, awesome art by Fernando Blanco and sure-to-be coveted covers by Arthur Suydam (75%) and a vicious variant chance cover by Fabiano (Marvel Zombies vs. the Army of Darkness) Neves, this is destined to be THE most talked about AOD series yet!
See More See Less 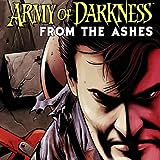 Army of Darkness Vol. 2
Dynamite proudly presents the return of Ash and the Army of Darkness! Fresh from the Marvel Zombies vs. AOD Cross-over! - well, not "minty" fresh, but fresh enough - from his appearance in the Universe of the Marvel Zombies, our un-intrepid hero has returned to his own world - but what a world it's become! Evil Ash and his Deadite hordes rule the land and everywhere Ash turns is filled with mut

Army of Darkness: Shop Till You Drop Dead
Grab the keys to the Oldsmobile and break out the boomstick 'cause Ash is back! The wisecracking everyman with a chin of steel comes face to face with something worse than Deadite possession: Unemployment. Recently returned from his time traveling adventure to Egypt, Ash gets a taste of department store bureaucracy when he is docked for the damages caused to the store and discovers the evil spirit
Army of Darkness Vol. 4
As the Chosen One, Ash has seen some strange things and visited some strange times and places. But nothing has prepared him for this! Catapulted into the depths of space, Ash must confront the Deadites in a place where no one can hear his screams... or his chainsaw... or his boomstick! What do the forces of the evil dead want with the International Space Station? Whatever it is, Ash embarks on his
Army of Darkness: Ash Gets Hitched
Ash and Sheila are reunited and Ash vows they will never be separated again. Can evil stop evil? This will be the question Ash will have to answer now that he has unleashed the Faceless Man on the land.
Army of Darkness: Ashes 2 Ashes
The Army of Darkness ongoing series is here and the first story arc features the crossover no one ever expected to see: Army of Darkness vs. Re-Animator! Ash Vs. West! Winner takes all! Following the exciting conclusion of Shop 'Til You Drop (Dead), this first issue finds Ash committed to Arkham Asylum. It's here that he runs afoul of a rather ghoulish and creepy Herbert West... and the battle of