Humanity's time is over. Submit or perish, because the Age of Ultron has arrived! The artificial intelligence known as Ultron has fought for years to eradicate mankind -- and now, it has all but succeeded. The few remaining heroes are battered, broken, almost beaten and left considering desperate measures -- some more desperate than others. But when Wolverine breaks ranks and pursues his own plan to defeat Ultron, will his drastic action cause more problems than it solves? Brian Michael Bendis presents the ultimate triumph of the Avengers' greatest villain in an epic that will shake worlds!
See More See Less 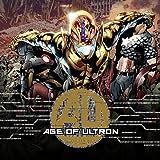 Age of Ultron
For years the heroes of the Marvel Universe have lived in fear that the artificial intelligence known as Ultron would one day evolve to fulfill its desire to wipe out all organic life and take over the Earth -- that day has arrived. The Avengers worst nightmare is here-- the Age of Ultron has begun.

Original Sin
WHO SHOT THE WATCHER? The Watcher, the mysterious space-god who's been watching us from the moon for as long as we can remember... is dead. Thus begins the greatest murder mystery in Marvel Comics history. As Nick Fury leads the heroes of the Marvel Universe in an investigation, other forces are marshaling as well and other questions are arising. The most important question being - who now h
Infinity
Prepare yourselves for the greatest battle for survival ever waged in the Marvel Universe as Marvel marches towards Infinity! The most dangerous threat in the Marvel Universe is back -- Thanos!
Secret Invasion
The shape-shifting Skrulls have secretly infiltrated every super-powered organization on Earth with one goal: full-scale invasion! It's reveal after reveal and shocking moment after shocking moment featuring the entire Marvel Universe!

Inhumanity
Inhuman chrysalises have appeared across the world...some want them, some want to destroy them...and your favorite superhuman students are caught in the crossfire!