Aces Weekly is an exclusively digital comic art magazine featuring some of the world's finest creators of comic art. David Lloyd - the guy who brought you V For Vendetta - has gathered professionals from around the globe to bring you this revolutionary publishing project.

Mandalay
A sweeping saga of two brothers locked in combat in colonial 1940s Burma, where an ancient magic will decide their fate, and that of the whole country. When a buried city is discovered deep in the Burmese jungle by a cruel 16th century monarch, he unleashes an evil counterpart, thanks to three mysterious mirrors. Five centuries later, during World War Two, the country is under British colonial rul
Adam Sarlech
No one remains unscathed in this trilogy of mid-19th century-set interwoven tales exploring love, revenge, and death. PUBLICATION IN 3 VOLUMES - COMPLETED WORK. An engrossing universe awaits the reader who dares go past the first page of this off kilter gothic saga, populated with a rich assortment of bizarre characters and haunting plots. Hints of Lovecraft and Poe abound as hidden secrets, the o 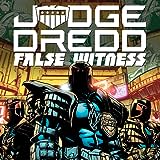 Judge Dredd: False Witness
Justice Academy drop-out Mathias Lincoln has built a comfortable life working as a courier for Mega-City One's most elite citizens. But after he uncovers a horrific conspiracy stretching from the Cursed Earth to the city's seats of power, Mathias also finds himself pursued by legendary lawman Judge Dredd!
Dark Horse Presents
The legendary, premier anthology is back! Dark Horse Presents returns with all-new stories by Neal Adams, Howard Chaykin, and Richard Corben; a new Concrete story by Paul Chadwick; a brand-new, all-color Finder story by Carla Speed McNeil; a prose piece from science-fiction legend Harlan Ellison; the return of Michael T. Gilbert's Mr. Monster; and much, much more! Please note that unlike the prin